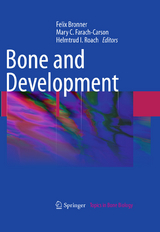 This is a sixth volume in a series of reviews, centered on a single major topic within the field of osteopathy. The book is an appropriate mechanism for advancing knowledge in the field to researchers, clinicians and others involved in the bone field.

This work intends to look at the role bone development within the field of pediatrics, covering all problematic aspects from basic skeletal growth to tooth mineralization.

To understand tissue development requires combining embryological and histological knowledge with the increasing information becoming available from molecular and genetic studies. Development is characterized by the expression of genes, their subsequent silencing and the expression of other genes. Disease, especially disease progression, is equally characterized by new gene expression that is then transmitted to daughter cells, with the silencing of other genes. In both instances these sequences are the result of the interaction between the genome and the epigenome, i.e. between a very stable set of structures and rapidly changing environmental factors.